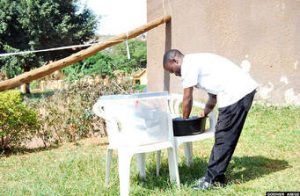 Thousands of votes from 46 polling stations in Kikuube district have been canceled over alleged election malpractices following Wednesday’s LCV elections.

According to him, this was detected after discovering that the number of the votes casted was outnumbering the actual number of voters in the affected polling stations and hence they had to cancel the results.

Otim however expressed sadness over such malpractices saying although nobody has complained to them officially over it but it was regrettable and investigations are underway to ascertain how it came out.