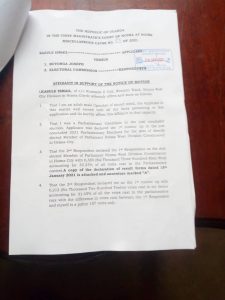 Hoima Chief Magistrates Court has set 25th January 2021, as the date to hear the petition by Ismail Kasule, a loser in the Hoima West Parliamentary race who is seeking a vote recount.

Kasule who contested on the Alliance for National Transformation- ANT party ticket was second in the race that was won by Dr Joseph Ruyonga, of the ruling NRM party. Kasule polled 6,212 against Ruyonga’s 6,369 votes.

Kasule who has sued Ruyonga together with the Electoral Commission wants court to order for a recount of all the votes cast in the Hoima West Division constituency parliamentary race and the cost of the application be paid for.

He contends that there were several errors that happened during the counting and declaration of results by the electoral commission hence ended up falsifying results.

Kasule alleges that there was manipulation of declaration of result forms (DR) leading to a declaration and tallying of wrong results to the detriment of the applicant.

The case will he heard at 10am on Monday.

Efforts to get a comment from Dr. Joseph Ruyonga nor the EC on the matter were futile by the time of filling this story.