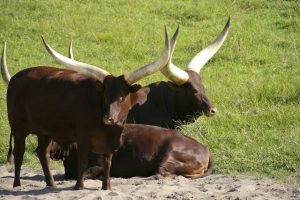 Cattle farmers in Bunyoro sub-region are crying foul following the drought that has ravaged the area. The drought has caused a shortage of pasture and water for their animals.

The most affected districts are Buliisa, Hoima, Kiryandongo and Kikuube. Several farmers have started losing animals as a result of lack of pasture and water to feed the animals. The drought-hit some of the district since November last year.

Richard Tumuhirwe, a farmer at Bugoigo landing site in Buliisa says he has so far lost 10 cows since November last year due to lack of grass to feed his cows. He adds that even the few available grass has been burnt by people not known to them. He calls upon the government to regulate bush burning in the area.

Joy Natukunda, a farmer in Kiryandongo says that all the available dams have dried up.

Emmanuel Mutaganzu, a farmer in Kasenyi lyato, Buseruka sub-county Hoima district says that close to 20 cows have died in his village since November last year.

David Rukundo, a farmer in Kagadi says by the time the drought started, pasture and water reserves were already below their usual levels adding that the impact has been devastating for farmers across the district and the entire Bunyoro sub-region.