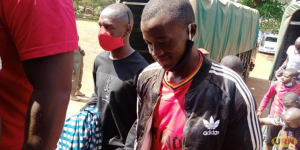 The General Court Martial in Makindye has denied bail to 36 supporters of National Unity Platform who are facing charges of illegal possession of ammunition.

A seven member panel led by Lt General Andrew Gutti has denied bail to the group  on grounds that they were involved in acts of violence when they were being arrested and such actions are most likely to continue if granted bail.

As such, the Court dismissed their application for bail and directed the military prosecutors to expedite investigations such that hearing can commence.

The Court relied on an affidavit  that was filed by the Prosecution led by Major Emmy Ekyaruhanga and Captain Ambroze Guma opposing the  bail application.

The prosecutors had adduced an affidavit sworn by  Detective Assistant Inspector of Police Peter Wetaaka who is attached to Criminal Investigations Department of Police in Kibuli.

Wetaaka said  that by the time the applicants  were arrested, they were inciting violent protests and were of violent conduct towards police officers who arrested them from Kalangala district.

Those denied bail are: