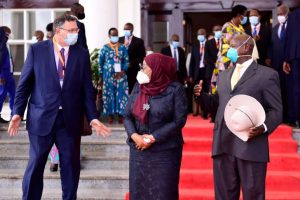 This signals the start of the construction of the pipeline that will transport Uganda’s oil from Hoima to the port of Tanga.

Among the agreements signed on Sunday between the officials from the government of Uganda and Tanzania and the oil companies’ CNOOC and Total are; Host Government agreement and the Tariff and Transportation agreement.

Speaking after the signing of the agreement that is over $10billion, President Yoweri Kaguta Museveni, said that he chose to work with Tanzania because of its historical contribution towards Uganda.

Museveni said Tanzania helped Uganda to sort out the political mess that had been created by past leaders.

On why he chose April 11 as the new date to sign the agreement, Museveni said it was the same day in 1979 when the Tanzanian army launched the assault on Kampala and deposed President Idi Amin.

For her part, Samia Hassan Suluhu, the President of United Republic Of  Tanzania who assumed the presidency last month after the death of John Pombe Magufulu, the pipeline will go a long away in cementing the relationship that her country has with Uganda.

She said in the region grappling with unemployment, the pipeline will create a number of jobs especially for the young people.

He said signing the agreement is a historical milestone in the journey of the oil industry not only for Uganda and Tanzania and for the whole of the East African region.

The construction of the pipeline is expected to take four years for the oil to start flowing. If complete, it will be the longest heated crude oil pipeline line in the world.