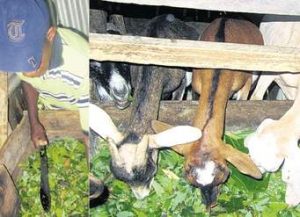 An outbreak of the Goat Plague has killed more than 200 goats at Mbegu landing site Buseruka Sub County, Hoima district.

Goat Plague is also known as peste des petits ruminants. The disease is characterised by sudden onset of depression, fever, discharge from the eyes and nose, sores in the mouth, breathing difficulties and cough, foul-smelling diarrhoea and death.

The goats started dying three weeks ago leaving many goat farmers stranded. Most of the goat farmers are forced to bury carcasses as people fear to eat their meat.

Suleiman Waaku, the Mbegu Landing site LCI Chairperson who lost his 20 goats to the disease explains that the residents became too scared and concerned following the massive death of their goats. He says the outbreak of the disease has economically affected farmers since most of them had invested in goat rearing.

Foste Ageya, another goat farmer who lost 182 goats in two weeks says he has lost more than 20 Million Shillings following the death of his goats.

Clever Oringi who is also practising goat farming says he lost 30 of his goats to the disease saying most farmers in the area have lost hope of further rearing goats. He wants the government to intervene and have the situation controlled immediately.