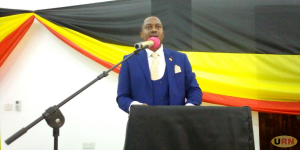 The new Hoima City Mayor, Brian Kaboyo has called for team work for them to succeed in uplifting the City.

Kaboyo was last Friday sworn in as the First Mayor of Hoima City in a function that was presided over by David Sayuni, the Hoima Chief Magistrate at Hoima Buffallo Hotel in Hoima City.

Speaking shortly after the swearing-in ceremony, Kaboyo called for team work among the people of Hoima City and the elected councilors to ensure that they deliver according to the people’s expectations.

Kaboyo, a member of the National Resistance Movement (NRM) Party won the hotly contested Hoima City Mayoral seat on January 20, 2021 after garnering 12,451 votes, beating the Incumbent Mayor Grace Mary Mugasa who contested as an Independent candidate and three other candidates. Mugasa had 12, 298 votes.

The other candidates in the race were Dan Kaija of Uganda People’s Congress (UPC) who had 315 votes, Rashid Tumusiime of the National Unity Platform who managed 303 votes and Wyclif Tumusiime of the Forum for Democratic Change (FDC) who had only 215 votes.

Kaboyo promised to put in place initiatives that will help stimulate productivity at house hold level in order to boost people’s income and livelihood within the City.

He pledged to embrace women emancipation and rights by empowering the women financially and also putting some of them in good working positions both in his administration structure and in society generally.

On Youth Employment, he says though his Council will not be in position to Provide employment to all the youths in the City directly, Local Content will be on his top agenda while recruiting workers.

Kaboyo says his office will partner with various organizations and friends within and out side the country to skill youths in various fields including Agriculture, Carpentry, mechanic among others that will help create a rather long-term value addition in their lives.

He further revealed that his administration will ensure full participation in each Oil and Gas activity so that people in the City and the entire Bunyoro sub region can have direct benefit from the critical resource that was discovered in the Albertine Graben.

Dr. Joseph Ruyonga, the MP elect Hoima West Division says this is the time for the sworn in leaders to embrace their manifestos and deliver accordingly.

James Byaruhanga, a resident of Hoima City challenges the newly sworn in leaders to do away with tribal, Political and religious differences that he says deter development.

Christine Aliganyira, a resident of Hoima East division wants the new leadership to prioritize health, road construction, Education and urban farming as they begin the new journey of leading the people of Hoima City.

Hoima City is situated 225km northwest of Kampala and it is where the Palace (Karuziika) of Omukama of Bunyoro is situated.

The City became operational on July 1,2020 and it is comprised of two divisions of Hoima West and Hoima East. Hoima West Division includes the wards of Kyentale, Nyakabungu and Kicwamba, areas of Bwikya, Southern and Northern and Central.

In 2020, the Uganda Bureau of Statistics (UBOS) estimated the mid-year population of the city at 122,700.  UBOS also calculated the population growth of Hoima to average 3.54 percent annually between 2014 and 2020.