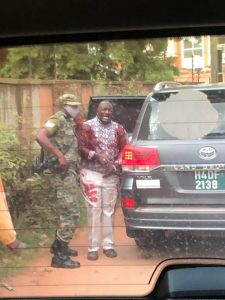 Unidentified gunmen have killed the daughter and bodyguard of the former Transport and Works Minister, General Edward Katumba Wamala.

According to our reporter, the gunmen intercepted General Katumba, who was driving in his vehicle registration number H4DF 2138 along Kisasi-Kisota road and sprayed it with bullets.

Eyewitnesses say Katumba’s daughter identified as Brenda Nantongo and his driver Haruna Kayondo died on the spot while the General escaped with gunshot wounds in the chest. “The bodies are still in the vehicle that is still at the crime scene,” he said.

Katumba was rushed to Malcolm Clinic in Kisaasi where he is receiving treatment.   Detectives have cordoned off the scene to search for any clues on the attack