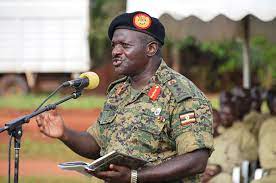 General Edward Katumba Wamala has opened about his attempted assassination, saying that he doesn’t have any clue why he was targeted. General Katumba survived an assassination on Tuesday after unidentified gunmen riding on motorcycles intercepted his vehicle registration number H4DF 2138 along Kisota road in Kisaasi and sprayed it with bullets killing his daughter, Brenda Wamala Nantongo 27, and driver, Haruna Kayondo on the spot.

The former Chief of Defense Forces (CDF), who also serves as an army representative in parliament, survived with two gunshot wounds on his shoulders. His bodyguard Khalid Koboyoit saved the day by firing bullets in the air when the attackers insisted on finishing the job forcing them to flee for dear life. Katumba was rushed to Malcolm Hospital in Kisaasi for treatment before being transferred to Medipal international hospital where he was operated on to remove the two bullets lodged in his body.

This morning, Gen. Katumba took to his Twitter handle and commented about the incident that nearly led to his demise. He explained that while driving in the morning with his daughter Brenda Nantongo, bodyguard, Haruna Kayondo and driver heading to his mother in-law’s vigil, an attempt was made to assassinate him. “I survived, but my dear daughter Brenda Nantongo Katumba and my driver Kayondo Haruna died at the crime scene. I have no clue about the motive of this attack. There was no reason to end the lives of these innocent people. May their souls rest in peace,” wrote Katumba.

Katumba also gave an update on the injuries he sustained, saying that he is out of danger, “I had surgery last evening and one of the bullets was removed. However, because of how the other bullet affected my arteries, it was not removed, and the doctors will advise on the way forward,” he said. Katumba thanked President Museveni for the care he showed him, saying that the phone calls of encouragement meant a lot to him. Katumba also thanked the Boda boda rider who rushed him to the hospital on his motorcycle for treatment and Malcolm Healthcare Kisasi.

“In the same spirit, I would like to thank Malcolm Healthcare Kisasi for everything they did to stop the bleeding. That first aid helped so much. Allow me to thank my escort, Sgt. Khalid Koboyoit for evacuating me from the crime scene as fast as he did and for shooting back at the terrorists. Things could have been worse,” he said. The General also thanked Medipal International Hospital for the care they have given to him.

He also thanked Archbishop Samuel Stephen Kaziimba Mugalu and Pastor Robert Kayanja for personally reaching out and coming to pray for him at the hospital. He also thanked the Speaker of Parliament, Jacob Oulanyah, Deputy Speaker Anita Among, Chief of Defense Forces, Lt. Gen. David Muhoozi and Maj. Gen Paul Lokech among other colleagues in the Uganda People’s Defense Forces for reaching out (to the hospital and the crime scene) as fast as possible.

He also expressed gratitude to Ugandans for the love and messages, they have been sending his way and vowed to keep fighting for his life.  “I pray that one day soon, the terrorists that tried to assassinate me and took the lives of my daughter Brenda and the driver Haruna will be brought to book,” he said.