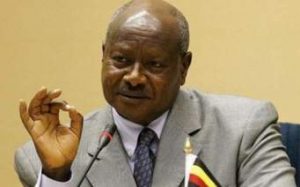 President Yoweri Kaguta Museveni has suspended inter-district for all private and public transport means in a bid to contain the coronavirus (COVID-19) with reports showing an increase in a surge of cases and community infections.

The announcement is part of the list of measures that President Museveni announced on Sunday evening that will strictly be observed under the renewed effort to curb the COVID-19 second wave in the country.

Although inter-district travel has been banned for 42 days, the president says this measure will be  effected starting on June 10, 2021, with a window of three days left to enable school children to return home given the fact that schools have also been closed for the same period.

Selected categories of vehicles have been waived from the inter-district travel restriction including; cargo vehicles (with not more than two people-driver and one turn boy), registered tourists’ vehicles, essential and emergency vehicles. However, the president says this excludes districts of Wakiso, Mukono, and Kampala.

However, public transport within the same district is not banned but vehicle operators have been asked to observe the set SOPs for transport which include; ensuring that all passages have masks, limiting the number of passages to half of the normal vehicle capacity among others.

The president has also suspended communal prayers in mosques and churches as believers have been asked to pray from their respective homes or make use of the mass mediate case was during the first national lockdown. However, marriage ceremonies, burials, and vigils have been allowed so long as they don’t exceed 20 people and are held in strict observance of standard operating procedures.

Furthermore, all public gatherings, conferences have also been suspended except for The Cabinet, Parliament, and The Judiciary.

Museveni also banned travelers from category A country (high-risk countries; currently only India is listed in this category. But he added that over time, this might be revised by the ministry of health.

Other suspended activities include; weekly non-food markets and monthly cattle markets, bars, cinema halls, discos, and concerts while Sports events have been allowed to go on without spectators but still under strict observance of sops including testing participants before each game.

Shopping malls and supermarkets have also been allowed to operate under close surveillance for about one week and it is found that they cannot adhere to SOPs, they will be closed.

In the same development, Shopping arcades, hardware shops, saloons, garages, food markets, lodges, and other commercial entities have been allowed to operate up to 7; 00 p.m. though curfew time has been maintained at between 9;00 p.m. and 5; 30 a.m.

Museveni says that unlike in the past, those found in violation of the set guidelines and restrictions will be fined a yet-to-be-set fee. The president says the secretary to the treasure will issue security controlled receipt book for this purpose.

He, however, emphasized that if Ugandans fail to observe the set guidelines and restrictions he will be left with no option other than announcing a total lockdown.

To date, Uganda has registered a total of 52,929 covid19 cases. Of these 374 have succumbed to the disease while 43,487 have recovered. However, only 8 percent of the infected patients are currently admitted to hospitals.