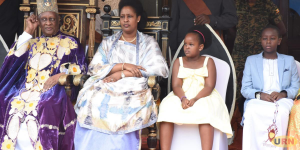 The coronation anniversary also known as Empango is commemorated on June 11th annually to celebrate the day Iguru ascended to the throne.  It attracts thousands of Kingdom subjects who flock to the palace [Karuzika] to attend the function.

During the celebrations, the King’s subjects and guests are treated to different cultural performances including dances, drama and poetry recitals. Iguru was enthroned on June 11, 1994, following the restoration of kingdoms by the ruling National Resistance Movement-NRM Government.

This year’s coronation anniversary was slated for June 11, 2021, at the King’s palace also known as Karuzika in the heart of Hoima City. Initially, the Kingdom had invited only 100 guests to attend what they called scientific celebration.

Andrew Byakutaga, the Kingdom Prime Minister says that the Omukama has suspended this year’s coronation anniversary following the new presidential directives of COVID-19.

Museveni on Sunday issued several guidelines including the closure of education and religious facilities. He also announced a ban on large public gatherings including weddings and funerals.

According to Byakutaga, they cannot go beyond the President’s directive and therefore all the planned activities meant for the coronation anniversary have been cancelled.

He however says the King will on June 11, 2021, come up with an address that will publicly be aired on all the Radio stations in the Bunyoro sub-region.

He has appealed to the Kingdom subjects to strictly adhere to government directive on COVID-19 to enable them to prevent the further spread of the disease.

Last year, Omukama Iguru suspended his 26th coronation anniversary due to the COVID-19 pandemic that ravaged the country.