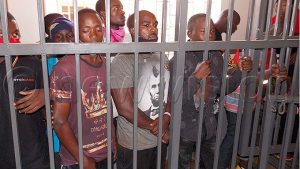 The General Court Martial has granted bail to the last batch of 17 supporters of the National Unity Platform who have been on remand on charges of illegal possession of ammunition.

The group which has been on remand for close to six months was released by Lt General Andrew Gutti after the Army Prosecutors led by  Captain Ambroz Guma told the court that they had not filed an affidavit in reply to their bail application.  Defence Lawyers led by Godfrey Turyamusiima told the court that they served the Prosecution with a copy of their bail application about two months ago, and failure to respond to it was evidence enough that there is no objection for bail.

Accordingly, Lt General Gutti argued that they had spent such a long time on remand and their application for bail had merit. He ordered them to execute a non-cash bail of 20 million Shillings and each of their sureties bonded at 50 million Shillings, not cash.

They were ordered to report twice a month before the Court Registrar and restricted their movements within Kampala and Wakiso Districts. At the pronouncement of their release, many broke down into tears, as they waited for the court processes to join their colleagues who were released earlier.

Prior to their arraignment in the General Court Martial, the 49 accused persons were first charged before the Masaka Magistrates Court on charges of inciting violence and doing an act that is most likely to spread an infectious disease. But the charges have since been dismissed.