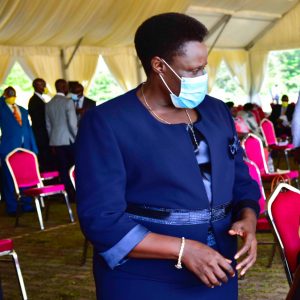 Katakwi Woman MP Maj Jessica Alupo has this morning been approved as the new Vice President of Uganda, replacing Edward Kiwanuka Ssekandi who has dropped from the cabinet last week.

The motion seeking Parliament’s approval of her appointment was moved by Ruhinda North MP Thomas Tayebwa and seconded by Worker’s representative Charles Bakabulindi in accordance with Article 108 (2) of the Constitution. In his motion, Tayebwa said that Alupo has demonstrated potential to serve and that she is a vibrant and distinguished citizen of Uganda.

Bakabulindi said that he had worked with Alupo as a fellow legislator and as a senior Minister in the Ministry of Education and Sports.

Only three legislators including Adjumani Woman MP Jessica Ababiku, Bardege-Layibi Division MP Martin Ojara Mapenduzi and Butambala County MP Muhammad Muwanga Kivumbi spoke in support of the motion before Deputy Speaker Among posed a question, which MPs approved.  The approval of the Vice President is by a simple majority in the House.

Following her approval, Alupo expressed her gratitude for the support received from legislators by confirming her to serve in the second-highest office in the country. Alupo also committed to working with all people regardless of their political shed, background or views.

“I take the opportunity to thank the appointing authority for the great confidence he has placed in me, I will not take it for granted. I Promise you and the people of Uganda that I will not spare any energy in me while serving this country on this appointment and we will work closely with you as a team to ensure that we serve this country expeditiously,” she pledged.