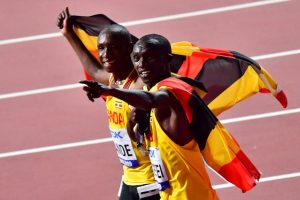 Sports Federations have resorted to seeking funding and sponsors to run their sporting activities. This is due to the low budget allocated to sports.

Last week Dr Bernard Ogwel, the Secretary-General of the National Council of Sports told sports federations that there will be no additional increase in the sports budget which they have been advocating for.

According to Ogwel, the NCS requires 197 Billion Shillings to fund all the sports federations.

Spice FM has learnt that the federations are seeking funding from betting companies like Betway Company, telecommunication companies including Airtel and MTN and also Alcohol companies that lie Nile breweries limited.

Hudson Ssegamwenge Vice President Administration Federation of Uganda Basketball Association, FUBA says that although they have been advocating for an increase in the budget, they have also looked for other sources to fund their activities because they do not only survive on government funds.

Godwin Kayangwe, President Uganda Rugby Union, said the Rugby has been trying to get other funding but still government money plays a big part in their activities. Kayangwe however said they have faced some setbacks due to COVID19 which has limited several of the sponsors.

Robert Jaggwe, the President Uganda Table Tennis Association said the Association will be looking for several other alternatives to fund the sports, however asked NCS to spend the little money received sparingly.