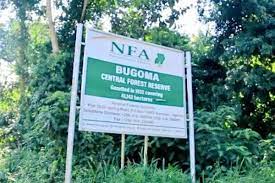 Concerned citizens in Bunyoro Region who are against the giveaway of Bugoma forest for sugarcane growing under their umbrella Save Bugoma Campaign have postponed plans to petition president Museveni seeking his intervention into what they call continued depletion of Bugoma forest.

The group that comprise mostly residents of Kikuube district say with the ongoing partial lockdown due to the surging cases of coronavirus, they will wait a little longer to petition the president.

The local communities with support African Institute for Energy Governance-AFIEGO had planned to submit the petition to the president copied to Bunyoro Kitara Kingdom and parliament on 15th and 16th of this month.

The communities need the president to order Hoima sugar limited to stop cutting down the forest for sugarcane growing, claiming the forest provides them with rain for theirs farms.

Speaking to Spice FM, Dickens Kamugisha the executive director AFIEGO, says the communities were unable to deliver their petitioned as planned due to movement restrictions from one district to another and some closed offices due to the pandemic.

However, he calls on the communities to remain calm saying that their petition will be submitted once the situation stabilizes.