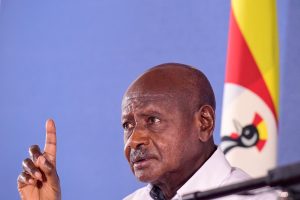 President Yoweri Kaguta Museveni has tasked the new Cabinet with five targets to focus on in the next five years.

These according to Museveni are cohesion, a corruption free Uganda, integration, patriotism and service delivery.

Museveni laid down the five targets in his speech to the Ministers who took oath today during a ceremony that took place at the Kololo Independence Grounds.

“This is a cabinet of cohesion in the system. I want the program of National Resistance Movement- NRM to be implemented enthusiastically. It must be a cabinet of no corruption. You people should be careful. There is nothing I don’t know. I appeal to the Ministers not to ask for anything from anybody. If you want to be durable leaders, don’t seek and accept favor from anybody. And don’t tolerate corruption under you,” warned Museveni.

He said that the Cabinet must resolve the issue of market for products in the EAC. The President also tasked the new cabinet to be patriotic and a team that shows concern.

Museveni noted that there is no need for one to go into public office if they don’t have a public spirit. He said that parasites should be out of public service.