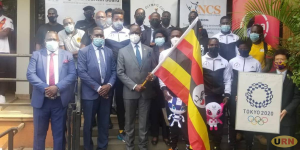 Eight members of the Uganda Olympic are under quarantine until July 3, 2021, after one of the nine-member delegation that arrived in Japan on Saturday tested positive for COVID-19 despite being vaccinated and tested before travel.

The COVID-19 victim is isolated in a designated Japanese facility. Now, Spice FM understands that the rest of the eight team members are undergoing the mandatory quarantine for two weeks in their hotel in Izumisano, southern Osaka in Japan despite testing negative.

“But our local healthcare center questioned the eight members and designated them as close contacts with the person who tested positive. Now we are requiring them to stay inside the hotel until July 3, the city was still looking into the possibility of allowing training outside the hotel. ,” a city official told AFP.”

Beatrice Ayikoru, the leader of the Ugandan Mission Tokyo 2020 at Uganda Olympic Committee, said that the committee had not received any communication indicating that the contingent is quarantined.

The development is a setback to the Ugandan contingent that had planned to have a full month of training in Japan before heading to the games that will kick off on July 23 2021. Reports indicate that the Ugandan athletes have not left the hotel since arriving in Izumisano.     Last week, organizers released various guidelines for athletes as part of their effort to hold the Games safely. These including testing athletes before their travel to Japan as well as on arrival and routine tested during their stay in the country.

The team risks expulsion from the games, if they break the rules including wearing masks and unnecessary travel.