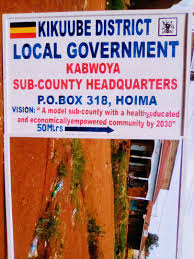 A number of Public Servants in Kikuube district local government have been interdicted on allegations of corruption related reports.

The affected department is the district Procurement. Peter Banura, the Kikuube district LC5 chairman has confirmed the report saying they resolved to suspend the officers to pave way for investigations into the allegations of abuse of office and causing financial loss to the district.

The interdiction follows numerous complaints from activists about delays to award contracts, clearing shoddy works among others.

The District Executive Committee, the Resident District Commissioner, Chief Administrative Officer and a section of heads of departments on Wednesday held a crisis meeting where it was resolved to suspend the officers.

Banura says the investigations will be extended to other departments to find out if every coin used in the previous years was accounted for properly for better service delivery in the district.