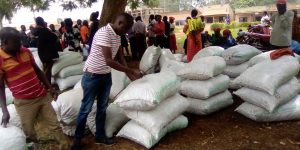 The project which started in 2018 was initiated by CSWCT to help in the fight against the human and wildlife conflict in the villages adjacent to Bugoma forest reserve in Kikuube district.

Speaking during a zoom meeting organized by CSWCT, Jenifer Atuhairwe, the Hoima district field officer for CSWCT said several Village Saving and Loans Associations (VSLAs) were formed and farmers were supported with non-palatable crops such as onion, Irish potato seeds and ginger among others.

According to her, over 454 farmers have benefited from the project and they can earn a living compared to when they engage in cultivation of maize, beans and cassava.

She adds that in the area where the project was implemented such as Bulimya, Muteme and Kaseta Parishes in Kikuube district, human and wild life conflict has reduced.