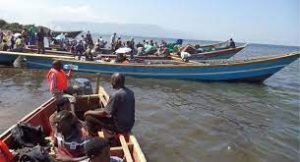 Two fishermen have been killed after their boat was hit by a hippopotamus on Lake Albert in Kikuube district this morning. The deceased were identified as Richard Opio, 27,  and another one Mugegere both attached to Bugoma-Kinya Landing Site in Kyangwali sub-county.

It is alleged that the duo had gone fishing on the Lake Albert when the Hippo attacked them and hit their boat forcing it to capsize instantly.

Javian Chekecan, a resident of Bugoma-Kinya Landing Site told Spice FM in an interview on Sunday that although, the duo sounded an alarm, it was not possible to save their lives since they were quite a distance from other fishermen on the lake.

Buhuka Parish Councillor Joseph Ringwegi says that the search for the bodies of the deceased fishermen have commenced. He however fears that the bodies could be eaten by the Hippopotamus since there is a herd of Hippopotamus at the site where the fishermen’s boat was hit.