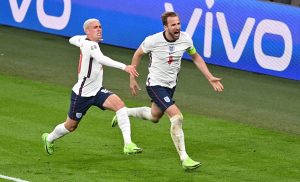 England cast aside the “suffering” of their World Cup defeat in 2018 to book a place in Sunday’s Euro 2020 final, said manager Gareth Southgate.

The Three Lions lost to Croatia after extra time in the semi-finals of the World Cup three years ago.

But they came from behind to beat Denmark 2-1 on Wednesday, meaning they will be in a men’s major tournament final for the first time in 55 years.

“I’m so proud of the players. It’s an incredible occasion to be a part of. We knew it wouldn’t be straightforward.

“When you’ve waited as long as we have to get through a semi-final, the players – considering the limited international experience some of them have – have done an incredible job.”

An own goal from Denmark captain Simon Kjaer cancelled out Mikkel Damsgaard’s opener, before Harry Kane grabbed victory for England in extra time by slotting home the rebound after his penalty was saved.

England will face Italy in the final, which will be played at Wembley in front of about 60,000 fans on Sunday.

“The most pleasing thing is we’ve given the fans and nation a fantastic night and the journey carries on for another four days,” said Southgate.

“We’ve got to enjoy the fact we’re in the final but there’s one more massive hurdle to conquer.”

Speaking to BBC Radio 5 Live, he said Italy were a “fantastic team”.