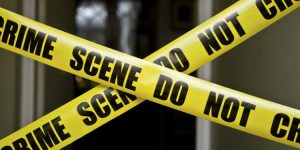 A man in Kakumiro district has brutally ended the life of his grandfather for allegedly stopping from selling part of their family land.

Twenty-four-year-old Mathias Katayimba, a resident of Buhonda village in Kisiita Sub County stormed the home of his grandfather, David Ngumbia around 11pm on Wednesday night and hacked him severally with a machete.

John Kyomukama, one of the area residents says Katayimba hacked his grandfather accusing him of stopping him from selling a piece of land in the area. Rose Kyaligonza, another resident says that by the time residents responded to Ngumbi’s alarm for help, he had already breathed his last.

Julius Hakiza, the Albertine Region police spokesperson, says that residents found the deceased’s a lifeless body lying in a pool of blood inside his house.

He says that they have launched a manhunt from the suspect who fled from the scene and appeals to anybody with relevant information on his whereabouts to notify police.

Police picked the body and took it to Kakumiro health Center IV for postmortem.