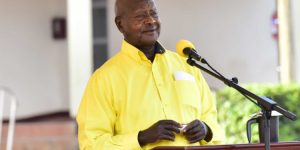 President Museveni has warned terrorists trying to destabilise the peace of Ugandans to surrender or they shall be killed.

Speaking at the swearing-in ceremony of another batch of ministers at Kololo independence grounds, Museveni says anyone who tries to kill Ugandans will not be spared.

His call comes at a time police has linked the suspects involved in the attempted assassination of works minister Gen Katumba Wamala to the Allied Democratic Force, ADF rebels.

According to Museveni, the government has defeated rural terrorists like the Kony rebels in Northern Uganda and the ADF in Rwenzori assuring Ugandans further boasting that the ADF rebels who are trying to infiltrate the country again shall also be defeated.

Museveni meanwhile says he is in talks with the Democratic Republic of Congo to find a possible solution to end the works of the ADF rebels.

“Thinking you can kill our people and continue and survive, you are deceiving yourself, and you will die. ”

He adds that ” You have been looking for trouble, now you are going to get it. You have been killing, you are now going to die. Your only way is to surrender. If you surrender for us we never kill people, you surrender and tell us, you shall go to jail, the court might condemn you to death but you will not be dead yet and maybe the president can say maybe reduce the sentence.”