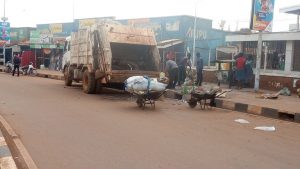 Residents in Hoima Oil City have expressed their anger as piles of uncollected garbage on streets.

They blame they City leadership of failing to prioritize the improvement of sanitation and hygiene which poses a public health and environment risk.

Abu Busobozi, the councilor for Northern Ward to Hoima East Division admits the problem which he attributed to irregular collections.

“Rubbish collectors sometimes come only once in two weeks. This practice results in an unhealthy environment in the area and invites rodents.” he said on Wednesday

Joan Nsungwa, a resident in Kiryatete said there was need by the leaders to collect piles of garbage located behind Hoima Bus Park which emit stinky waters.

Dema Gabriel, a councilor representing the Central Ward and secretary for finance and Planning at Hoima East Division however challenges the Hoima Oil City mayor to prevail on his technical team.

Sylvia Nalumaga, the Hoima Oil City deputy mayor and secretary for Finance, Planning and Administration said the garbage trucks have been down due to mechanical problem but they are being repaired to resume operations.