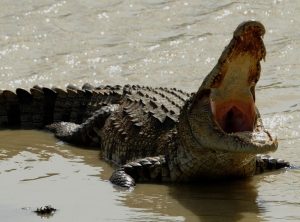 Simon Okumu, who was a resident of Okwece Village in Karuma Town Council went missing on Saturday after he went fishing on River Nile.

Joseph Oryem, the Karuma Town Council Local Council I says the deceased is suspected to have been eaten by a crocodile.

Oryem explained that an attempt was made to locate him by the team of Uganda Wildlife Authority on Sunday morning but only parts of his body were recovered. “We only found his head and part of his chest and with foot marks of a crocodile around,” said Oryem.

He however revealed that seven people, mostly hunters and fishermen have died in the area in a period of four months, a situation described as worrying.

A week ago, a former primary school teacher in the area identified as Boniface Opota went missing on River Nile after he had also reportedly gone fishing.

The Kiryandongo Resident District Commissioner Paul Peter Debele has however advised the locals to desist from illegal hunting in the River and the National Park.