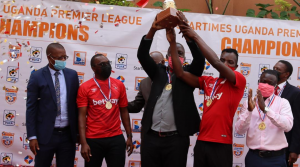 The Star-Times Uganda Premier League season 2020/21 ended prematurely after President Yoweri Museveni declared a nationwide lockdown as a measure to control the spread of COVID-19.

Consequently, the football governing body, FUFA declared Express FC which was leading the table with 58 points the champions of Uganda Premier League, and today, the club was crowned at an event held at Star Times head offices in Nakasero. The top scorer and the best goalkeeper were also awarded.