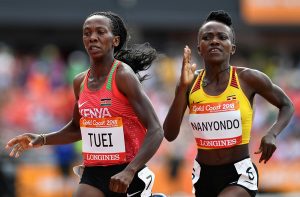 The commonwealth 800m bronze medalist entered the competition seeking to perform better over the mile distance, however, she failed to beat her personal best of 4:18.65 which is the National record in the 1-mile race.

Before the event in London, Nanyondo had commanded the fourth position in the 1500 m race at the Monaco Diamond League (DL) Meeting in France on Friday. Here she posted 4:1:18 behind Kenyan Faith Kipyegon and Sifan Hassan.

The middle-distance runner wanted to improve her time ahead of the Olympic games.

Nanyondo is one of the few athletes who qualified for a double in the forthcoming summer games. She will compete in the 800m as well as the 1500m.

Nanyondo’s personal best time in the 1500m stands at 3:59.56 which was set at the Rabat DL Meeting in Morocco.

Meanwhile, Uganda has only qualified three middle-distance runners, Winnie Nanyondo, Halima Nakaayi of 800m and Ronald Musagala who will feature in the 1500m.