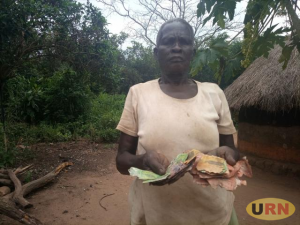 An elderly couple in Amuru district is stuck with Shillings one million six hundred and fifteen thousand after being damaged by termites. Seventy-five-year-old Bicentina Alal and her 80-year-old husband Tito Okema, have been saving money in a metallic case for over three years.

The couple lives with their six grandchildren in Kali-Kali Village in Rec Iceke Parish in Layima Sub County, which is about 50kilometers away from Gulu City Centre. They opened their saving box in June early this year only to discover that the paper notes had been destroyed by termites.

The damaged notes are in the denominations of 20,000 (35), 50,000 (10), 10,000 (36) and 5,000. Some of the notes are damaged beyond recognition. Alal told URN on Tuesday that they have been saving their proceeds from the sale of papyrus mats, dried cassava chips, crops, mingling sticks, poultry and domestic animals. He said that they would pick part of the money once in a while for their medication or supporting their children.

Her husband, Tito Okema, says that left without any other option, they gathered the damaged notes and are now keeping them in another metallic bowl with the hope that someone may come to their rescue.

Okema explained that they neither have bank accounts, simcards nor even subscribe to the village SACCOS where they can safely keep their savings. Asked why they don`t own any savings account or subscribe to any group, the couple said that they do not trust anyone with their money.

‘’It was about one million shillings plus, the money was to help me with sickness and for the children. I cannot now do anything because the money is already spoiled if it can be changed. I want to be assisted if it can be. Me I don`t have any other work, I am a farmer ever since childhood.’’ Okema said.

Cosmas Apuke, a son of the couple was equally astonished on Tuesday when his parents disclosed and showed URN the damaged notes. He noted that he is yet to find out from the Bank of Uganda whether they can replace the damaged notes, whose serial numbers can be retrieved from their archives.