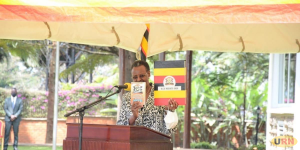 The Ministry of Education, Science and Sports has released Uganda Certificate of Education (UCE) examination results for the year 2020 indicating an improvement in the general performance of candidates.

According to the results released on Friday at State House Nakasero by the Minister of Education, Janet Kataha Museveni, 39,968 candidates in 2020 passed in Division One compared to 27,842 in 2019. In Division Two, the same trend was maintained with 16,635 candidates passing in this grade compared to 86,417 in 2019.

Dan Odongo, the UNEB Secretary applauded the performance of the candidates saying it was great despite learning being disrupted when schools were closed to contain the spread of covid-19.

Mrs Museveni described the improvement in performance as a testimony that God is doing good things for the country.

148,135 of the candidates were under the Universal Secondary Education (USE) Program while 185,754 candidates registered in Non-USE schools.