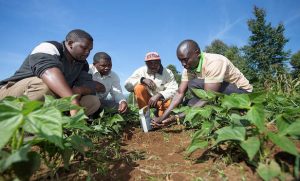 Youths have asked the government to increase funding in the agricultural sector.

Laban Musinguzi, the Executive Director of Agro Fresh Uganda, an Organization that unites youths participating in agriculture and agribusiness says that government needs to invest in training youths on better farming practices and also fund investments in agriculture.

Musinguzi says that as Uganda sets to join the rest of the world to mark the International Youth Day celebrated every 12th of August, it should show commitment and action by making deliberate efforts to attract more youths into Agriculture which is Uganda’s biggest export earner.

Musinguzi says that while the government has established programs that include the youth Livelihood Fund, Operation Wealth Creation and Emyooga, these are scattered initiatives with no deliberate target to youths in agriculture and agribusiness.

He wants the government to directly fund youths through offering grants but also make agricultural loans more accessible. According to the Bank of Uganda, interest rates on Agricultural loans is 12 percent annually but Musinguzi says that that is still high for youths.