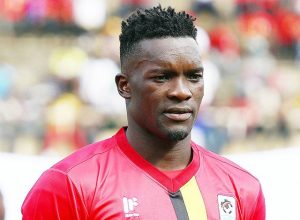 The Tanzania’s team confirmed the development via their tweeter handle.

Aucho 28, joins Young Africans as a free agent after ending his contract at Egyptian’s side Misr El Makkasa in June this year.

Club official, Hersi Said, said the club is happy to land Aucho who he believes he is experienced and will help the club. We believe Aucho brings to the team something special, said the official.

Before joining El Makkasa, Aucho featured for various teams locally and outside Uganda, these include Simba SC, Tusker, Gor Mahia, in Serbia and India.

Aucho has been influential in Uganda Cranes midfield featuring in the last two Afica Cup of Nations (AFCON) finals.

However, earlier this year in March, as the national team was preparing for an Afcon qualifying match against Burkina Faso, the midfielder was rejected in the camp after he failed to respect the national team’s code of conduct by refusing to board the official means of transport organized to pick him from Entebbe international airport.