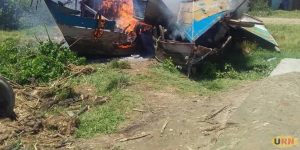 More than 2,000 illegal fishing boats have been set ablaze by the Fisheries Protection Unit-FPU in a new operation against illegal fishing gear being conducted on the Lake Albert waters.

The operation that started early this month has also seen 15,590 monofilament nets impounded and destroyed by the Fisheries Protection Unit-FPU. The illegal fishing gear was impounded during various operations in Buliisa, Hoima, Kikuube, Kagadi and Ntoroko districts under the Command of Lt. Colonel Dick Kaija, the Commandant of the Fisheries Protection Unit.

Now Lieutenant Lauben Ndifula, the spokesperson of the Fisheries Protection Unit told Uganda Radio Network on Monday that they have been able to destroy 2,093 illegal fishing boats and 15,590 monofilament nets ever since the new operation was launched early this month. He added that 4,000 illegal hooks,1,942 solar bulbs and 299 solar batteries that were being used illegally by the fishermen have also been confiscated.

Ndifula says all fishermen operating on Lake Albert have one week to acquire the recommended fishing gear. Illegal fishing, according to the Ministry of Agriculture, Animal Industry and Fisheries involves using less than five-inch fishing nets for Tilapia and less than seven-inch fishing nets for Nile Perch. It also entails using fishing boats that are less than 20 feet in length.

John Opar, a fisherman at Butiaba Landing Site in Buliisa district who is one of the locals whose boat was destroyed said fishing has been his mainstay over the years and destroying his fishing boat will push him out of business.

Similarly, Pius Wakabi, the Bugahya County Member of Parliament says that the fishermen should have been given ample time to prepare since the lake is their only source of survival. Lake Albert employs approximately 56,000 fishermen who harvest more than 100,000 tons of fish per year. Overall, fishing supports the livelihood of more than 1.6 million people in Uganda.

Over the last 15 years, the fisheries sector has played an important social and economic role in the country as one of the key foreign exchange-earners, contributing 2.6 per cent of Gross Domestic Product (GDP) and 12 per cent to agricultural GDP.