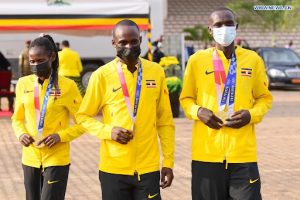 Uganda Athletics Publicity secretary Namayo Mawerere confirmed that the trio together with two other athletes have been entered for the event.

Cheptegei who won a gold medal in the 5,000m final and silver in the 10,000m and and Kiplimo who picked a bronze medal in the 10,000m are expected to face tough competition in the 2-mile race in Eugene. They will be battling against Canada’s Mohamed Ahmed who won silver in the 5000m race and USA Paul Chelimo who won bronze at the recent Olympics among other athletes.

Chemutai 22, will also be on track the women’s 3000m steeplechase where she will be taking on World Champion Beatrice Chepkoech who finished 7th place in Tokyo, Olympic silver medalist Courtney Frerichs (USA), among other contestants. Chemutai became the first Uganda female athlete to win an Olympic medal when she nagged a gold medal in the 3000m steeplechase.

The other Ugandan Olympians who will take part in the event include world champion Halima Nakaayi and common wealth bronze medalist Winnie Nakaayi.

Nanyondo finished 5th in the semifinals of the Olympic Games in the 800m race where she posted 4:01:64. She also finished 7th in the finals of the 1500 meters. After the Olympics, she said her focus is on the Eugene Diamond League.