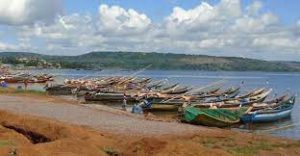 Fishermen operating at various landing sites on the shores of Lake Albert in the Bunyoro have asked Prime Minister Robinah Nabbanja to intervene and halt the ongoing operation against illegal fishing gear in the area.

The fisheries Protection Unit-FPU early this month launched an operation against illegal fishing gear on the Lake Albert. Since the operation started, the FPU operatives have burnt more than 2000 illegal boats and 15,590 monofilament nets impounded and destroyed.

Solomon Wamala, a fisherman at Butiaba landing site in Buliisa wants the office of the prime minister to suspend the operation and give the fishermen time to reorganize themselves from the effects of both the COVID-19 pandemic and the floods that caused the havoc.
Fred Wathum, a fisherman at Bugoigo landing site in Buliisa district explains that as fishermen, they were not consulted and were surprised to see the FPU operatives storming their landing sites and burning their fishing gear.

He says following the operation, they are languishing in poverty since fishing is the only source of their livelihood.

John Tibenda, a fisherman at Kijangi landing site in Hoima District says the FPU operatives conducting the operation are too ruthless and hostile calling upon the office of the prime minister to first put the operation on halt and conduct thorough sensitization among the fishermen on the use of the recommended fishing gear.

Lt. Lauben Ndifula, the spokesperson of the fisheries protection Unit-FPU explains that the fishermen were given ample time to reorganize themselves before the operation started.

He says the only alternative is that the fishermen should acquire the recommended fishing gear as required by the law.