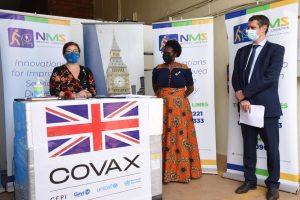 Uganda has received 300,000 doses of the AstraZeneca COVID-19 vaccine from the United Kingdom.

Andrew Ockenden, the Development Director UK High Commission in Kampala on Thursday handed over the doses to Margaret Muhanga, the Minister of State for Primary Health Care at the head offices of the National Medical Stores-NMS in Entebbe.

Ockenden said that the doses are expected to help the priority groups, including teachers, those aged 50 years and those over 18 years who have underlying health conditions such as hypertension and diabetes, to receive their second dose.

He also said that Uganda is expected to receive an additional 3 million doses from the UK under the COVAX arrangement.

Muhanga, lauded the UK government for the donation, saying the latest batch of doses brings the total number of doses received to over 2 million doses.

According to Muhanga, 1.3 million people have so far been vaccinated. Of these, 320,000 have been received the second jab.