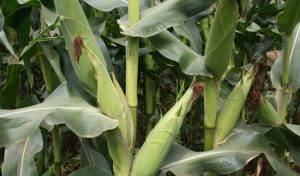 Farmers in Bunyoro region have been advised to find alternative crops to grow other than maize.

Dr. Patrick Musinguzi, the principal investigator for Makerere University Research Innovation fund project argues that maize is a deep rooted crop yet different areas such as Buhimba sub-county in Kikuube district have soils with shallow depth making it unfavorable for maize growing.

He notes that such soils are favorable for crops which are shallow rooted such as rice, milt and simsim among others.

He adds that such soils need a lot of fertilize application which makes it very expensive compared to the market price of maize. He advises farmers to engage in maize production for food security but not for commercial purpose.

Bunyoro Region, for a long time was known for growing indigenous food that kept families food secure. The food varieties included millet, beans, simsim and maize that were drought resistant. On the contrary today, many farmers are crying foul after unpredictable weather patterns that have left them with little to feed on.