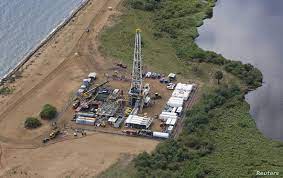 Only two oil and gas firms submitted bids for the s second oil and gas licensing round for the exploration of five blocks in the Albertine Graben.

One of the companies whose bids is being evaluated is DGR Global which owns majority stake in Armour Uganda-an Australian firm exploring for oil in Kanywataba block.

While the Energy ministry had shortlisted four companies to bid for new oil blocks, Spice FM learnt that some of those including Total and its partner CNOOC did not submit the bids by close of the bidding at the end of June.

CNOOC had through Total joined the process when the ministry hosted the bidder’s conference in June. The Manager of the Second Licensing round, Frank Mugisha revealed in an interview that only two bidders submitted bids for three out of the five blocks under offer.

The two companies whose bids are being evaluated include Uganda National Oil Company and Australia-based DGR global. The blocks which have so far attracted bidders include Turaco, Omuka in Nebbi and Kasuruban stretching between Buliisa and Packwach.

According to Mugisha, the evaluation of the bids is expected to be concluded by second week of September and that negotiation with successful bidders should be concluded before end of December 2021.