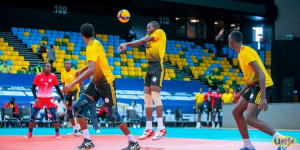 The Volleyball Cranes has defeated Burkina Faso 3-1 in their opening game in the African Nations Volleyball Championship at Kigali Arena in Kigali, Rwanda. Uganda proved a better side over Burkina Faso dominating almost all sets.

Uganda won three out of the four sets. Uganda opened the game with a good display in the first technical minutes which helped them to win the first and second sets. The first set ended in 25-15 while the second ended in 25-18 both in favour of the Volleyball Cranes.

Although Burkina Faso put up a spirited fight to pull back the third set scoring 28-26, they surrendered the fourth set to Uganda ending in 25- 13. This helped the Volleyball Cranes to win its first-ever game at the continental championship.

Uganda Volleyball Cranes is in group A alongside hosts Rwanda, Burkina Faso and Burundi. A win against Burkina Faso is a good start for team Uganda as they look on to top their group in the championship.

Uganda’s next fixture will be against Burundi on 9th September before they face Rwanda on 10th September in their last group game. Before their first game, Uganda had lost a buildup game against Morocco played on Saturday as they prepared for the continental championship.

The tournament is expected to give Uganda’s players good exposure as they showcase their talent for the first time on the continent.