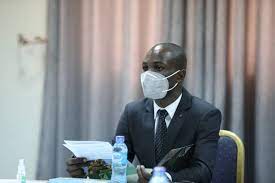 Fred Byamukama, the State Minister for Works has intervened into a conflict that has stalled the construction works of 25.7km Kabaale-Kiziranfumbi critical oil roads in Kikuube district.

Kabaale-Kiziranfumbi is one of the critical oil roads such Masindi-Biiso 54km, Hohwa-Nyairongo-Kyarushesha-Butole-25km and 25.7km which was in 2019 contracted China Railway Seventh Group.

The minister’s intervention follows a petition from the Kikuube Woman MP Florence Natumanya following a compensation dispute arising from land wonership among one family.
The road has stalled for more than two years after the wives of the late Rajab Turyamureba in Kyarwensambya village in Kiziranfumbi town council failed to agree on who should be compensated.

According to the Omuhereza Asiimwe Butamanya, the father to the deceased, his son who died in 2017 left behind a house in Kyarwensambya village.
The deceased’s wives, Justine Nsimiire Nalongo of three children and the second wife Sylvia Twijukye started fighting over the house.

According to the Omuhereza Asiimwe, the two wives are both claiming compensation and one wife Twijukye has since gone to court seeking justice.
However, Minister Byamukama on Monday held a meeting with the conflicting arties at the office of the Kikuube RDC and resolved the impasse.