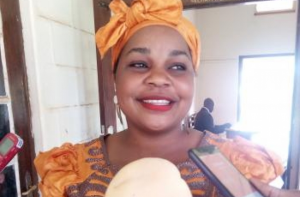 She allegedly assaulted Racheal Asiimwe on Sunday for recording what was transpiring in a meeting the legislator convened at her home in Kasasa Rukonge in Hoima West division, Hoima City.

Asiimwe says that the MP pounced on her slapping her severally before confiscating her mobile phone.

Businge refuted the allegations, saying her supporters roughed up Asiimwe for allegedly conning them money. According to Businge, she received complaints from several members of the public accusing Asiimwe of conning them using her name.

She says that some of the people Asiimwe conned stormed her home on Sunday prompting her to invite her to defend herself but turned hostile prompting the supporters to pounce on her.

Julius Hakiza, the Albertine Region police spokesperson, says Asiimwe has recorded a statement with the police, adding that police is yet to summon the MP to record a statement.

In August 2020, Businge came under the spotlight when her supporters brutally assaulted her rival, Beatrice Wembabazi while returning from Runga landing site in Kigorobya Sub County.

Busingye’s supporters blocked Wembabazi near Kiryatete landing site. The legislator’s driver Henry Gama jumped out of the vehicle and assaulted Wembabazi and her driver, Julius Birungi.

Wembabazi was rushed to EDPA Medical center in Hoima City while in a coma where she was referred to Mulago National Referral hospital after her condition deteriorated. Police later summoned Businge to record a statement at Hoima Central police station.