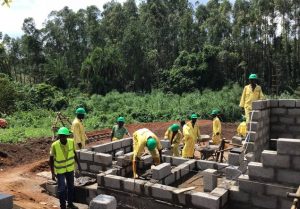 The Kagadi district piped water project will be on substantial completion by 30th September this year.
In December 2018, the Ministry of Water and Environment handed over construction site to Samcrete Egypt-Engineers and Contractors to undertake the construction works of the Piped Water Supply System project. The project is estimated to cost 22.8 billion shillings.

The project is jointly funded by the government and African Development Bank-ADB through the Water Supply and Sanitation Program Phase II (WSSP II) was expected to be completed in one year.

According to Paul Kato, the branch manager Water Supply and Sanitation Program central and Bunyoro sub regions, explains that they require 16 billion shillings to complete the work.
Meanwhile, the site engineer SAMCRETE piped water project contractor Henry Kayiwa explains that the project has also aced other delays caused by land issues especially in sites of Kyengaju, Muhorro, Ruteete among others.

However, the Kagadi District LCV chairperson Yosia Ndibwami Bahunga has aksed the contractor to finalise the work as per the contractual pbligations.

Once completed, the project is expected to enhance provision of water supply and sanitation facilities to Kagadi, Muhorro, and Kyenzige town councils.

The project will see the construction of a Pump house, operator house and two office blocks with waterborne toilets and four public water borne toilets to promote sanitation.

Kagadi district is one of the districts in Bunyoro region with problem of clean water coverage.

Most of the residents fetch water from swamps and unclean water wells, putting their lives at risk of contracting diseases.