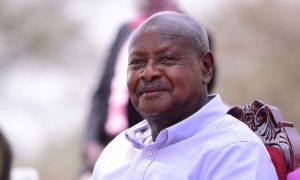 Less than 24 hours after President Museveni clashed with Chief Justice Owiny-Dollo over granting bail to capital offence suspects, the ruling National Resistance Movement -NRM Parliamentary Caucus is sitting this morning as stakeholders hold their breath hoping the meeting will resolve the contentious issue.

Lilian Aber, the NRM Parliamentary Caucus Secretary General has confirmed that the meeting scheduled to be addressed by the President will take place this morning at Kololo Independence Grounds, starting at 10:00am.

However, the Kitgum Woman MP declined to reveal the agenda of the meeting when asked whether it was about the hot bail issue that has seen the mild-mannered Owiny-Dollo go head on with President Museveni. Aber say that the issue might come up but cannot be certain about the focus of the President’s address.

She said that the issue of bail is not only of concern to the President but also to many people who have lost their relatives to murderers. Aber notes that the Caucus may discuss the issue and if it is agreed that they push for an amendment of the law, they will do so.

The unprecedented clash between the President and the Chief Justice on the issue of granting bail to persons accused of capital offences pending determination of their cases occurred at the 4th Annual Memorial Lecture for the slain former Chief Justice Benedicto Kiwanuka held at the Judiciary Headquarters in Kampala where Museveni was the Chief Guest and Owiny-Dollo the host. It was organised under the theme “Administration of Justice in Uganda through the years”.

At the event, the Chief Justice said bail is a constitutional right which is supposed to be either granted or denied upon the discretion of the presiding judicial officer who should also exercise that discretion judiciously.

Owiny-Dollo said a judicial officer cannot wake up from the good or wrong side of the bed and decide whether to grant or deny bail to an accused person, because it’s a constitutional right the officer has to grant upon considering a number of circumstances for instance, if one will abscond from trial or not among others.

Alphonse Owiny-Dollo added that however he has heard President Museveni on a number of occasions having a different view on the right to bail, saying that the judicial officers should remember the oath they took to dispense justice without fear or favour and independently.