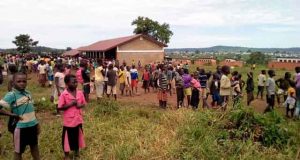 More than 1000 Congolese nationals fleeing tribal clashes between the Lendu and Bagegere in the Eastern part of the Democratic Republic of Congo have crossed to Uganda through the Lake Albert in Kikuube district.

He says they received 1,100 refugees from DRC who are fleeing fresh clashes between the lendu and the Bagegere. Kyaligonza explains that they are expecting more refugees who crossed and were received at Bubukwanga reception center in Bundibugyo district and are being transported to the Kyangwali refugees’ settlement area.

He says despite the closure of Uganda’s borders due to the COVID-19 Pandemic, the new arrivals were given special consideration given the harsh situation in their home country. According to Kyaligonza, currently, they have embarked on documenting the refugees, assigning them status and settling them on land.

They were later transferred to the Kyangwali refugees’ settlement area.