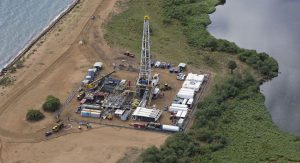 The Lake Albert oil project may not receive a final investment decision (FID) from China National Offshore Oil Corporation soon as anticipated. While its joint Venture Partner, Totalenergies is developing the site for the Tilenga project.

CNOOC has not awarded any contract for similar work. A source close to the company and the Energy Ministry says the Chinese company is still ‘foot dragging’ as it asks government of Uganda to full fill certain conditions for FID to be announced.

The source indicates that one of the conditions had been the demand that the government puts up a high voltage power line to the areas where oil and gas is to be extracted and refined.

The government complied and has since put up a 220 kilo Volt power line from Nkenda in Kasese District, through Fort Portal, in Kabarole District ending at Kabaale, in Buseruka sub-county, in Hoima District.

When hosting Parliament’s budget and Natural resources at the Kingfisher project this week, CNOOC Uganda’s Vice President, Cui Yujun, said the company is ready to deliver the project at the same time with Totalenergies’ Tilenga project located in Bulisa district.

Totalenergies plans first oil by 2025. He was not categorical on when the company will announce the Final Investment Decision (FID) for the Kingfisher oil development project.

Speaking at the meeting, State Minister for Minerals, Peter Lokeris said the government had fulfilled most of what it had promised to do.

He urged CNOOC and the Joint Venture partners to announce the FIDS so that work on the projects commence as planned. A Final investment decision on Kingfisher development will allow CNOOC to award $460 million worth of contracts to Chinese and Ugandan players waiting to cash for construction and logistics supply among others.

The kingfisher project is expected to produce up to 40,000 barrels of crude oil per day. There are plans to construct a Central Processing facility from Buhuka on Lake Albert to Kabale where the Refinery will be located.