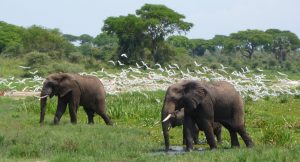 Farmers neighboring Murchison Falls National Park in Kiruli sub-county in Masindi district want the government to dig trenches around the villages adjacent to the park to deter elephants from destroying their crops.

For many years, residents of fivevillages; Bagidadi, Kitengule, Ipedi, Kimina and Nyakarongo which border Murchison falls national park have been complaining over the increasing number of stray elephants that cross from the park and destroy their crops.

The residents say 30-50 elephants evade the areas and they destroy crops which has resulted into food insecurity.
one of the affected residents one Opusi adds that the elephants come along with black flies which are dangerous to human lives, adding that apparently, they can no longer rare pigs due to black flies.

Monica Bagonza, a resident of Nyakarongo village explains that women are the most affected since most of them are the breed winners of the families and demanded government to intervene by digging trenches to control the invasion.

Cosmas Byaruhanga, the Masindi district LCV Chairperson, says that there is need to engage the affected communities to harmoniously stay with the wild animals from the park as government looks for a lasting solution.