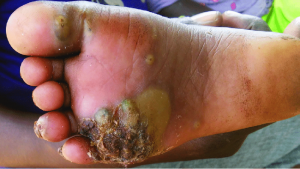 An outbreak of jiggers has killed at least one person and taken host in several residents in at least two town councils in Kagadi District.

Rupin, a resident of Mpumude cell in Kyaterekera town council died Sunday after spending a long time suffering from jiggers that had infected his body.

Ruteraho has expressed worry over the increasing cases of jigger infestation among residents in the district.
She noted that parents and children have been infected with the parasites; attributing it partly to poor hygiene.

The RDC said children in Kyabitundu cell, Rugashali town council have been seriously infected with jiggers that she blamed on child neglect.

Ms Ruteraho warned parents especially mothers against consuming excessive alcohol that she said contribute a lot to increasing cases of jigger infections in the district since they do not have time to take care of their children’s hygiene.