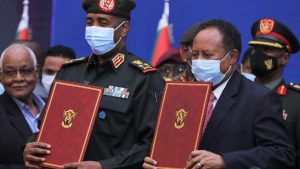 Sudan’s ousted Prime Minister Abdalla Hamdok has been reinstated following last month’s coup when he was put under house arrest.

He has appeared on TV to sign a new power-sharing agreement with coup leader Gen Abdel Fattah al-Burhan amid continuing mass protests.

But the civilian coalition that nominated Mr Hamdok as PM two years ago refused to acknowledge any new deal.

The pact had been struck with a gun to his head, a spokesperson told the BBC.

“The future of the country will be determined by the young people on the ground,” Siddiq Abu-Fawwaz, from the Forces for Freedom and Change (FFC) coalition, told BBC’s Newshour programme.