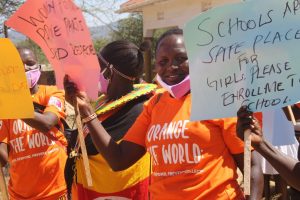 Cultural practices and tribalism have been identified as some of the factors fuelling cases of Sexual and Gender Based Violence- SGBV in Kyabigambire and Kigorobya sub counties in Hoima district.

Kubra Katusabe, the chairperson women champions under Centre for Health Human Rights and Development-CEHURD says many girls and women in the two sub counties have faced several cases of SGBV including incest, rape and defilement but they fear to report such cases.

She adds that in some instances, the pereptuators threaten the victims with cultural beliefs and norms hence they can’t report them to authorities for legal support.

She made the remarks during the launch of the 16 days of activism against SGBV organized by CEHURD in partnership with Reproductive Health Uganda (RHU) at Kyabigambire Church of Uganda School under the theme is “Orange the world: End violence against women now!” .

Katusabe also noted that ignorance of the communities about the existence of relevant policies on their welfare is another factor that is to blame for the increased SGBV cases in Hoima district.

Amstrong Allan Katunda, from RHU Hoima expressed dismay over the increased rape cases in communities saying many survivors of rape fail to get justice after evidence is always tampered with while others the perpetuators negotiate with the families of the victims to settle the matters out of the law.

The Hoima District Health Officer Dr. Lawrence Tumusiime noted that culture and fear have hindered several men who are survivors of SGBV from accesing justice.

Judith Nakalembe, the SGBV specialist called up on the government to fulfill its pledge for construction of the rehabilitation shelter for survivors of SGBV in Uganda especially in Bunyoro where SGBV cases stand at 80%.
The 16 Days of Activism against Gender-Based Violence is an annual international campaign that kicks off on 25 November, the International Day for the Elimination of Violence against Women, and runs until 10 December, Human Rights Day.