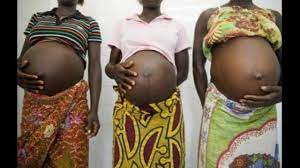 Masindi district has registered a surge in defilement with more than 1,000 cases reported between January and November 2021.

Records at the district health, education, probation and social welfare departments show that 1,264 young girls aged between three and 17 were defiled this year alone. The cases were recorded from the sub counties of Kimengo, Bwijanga, Pakanyi, Karujuru, Kijunjuba, Budongo and Masindi Central Division.

Annet Karamagi, the Masindi District Probation Officer says that of the defiled girls, ten were compelled into forced marriages by their parents in Kimengo and Kijunjuba sub-counties after the parents negotiated for payments ranging between one and two million Shillings with the defilers.

Karamagi attributes the escalating defilement cases in the district to poverty, corruption, child neglect, child labour, domestic violence, and the prolonged lockdown that led to the closure of schools due to the outbreak of COVID-19 in the country. She however says that 264 suspects have been arrested and arraigned before the court since January this year.

Moreen Kyomuhendo, the field officer-Forum for Women in Democracy-FOWODE says there is a need for massive sensitization about the escalating defilement cases in the district adding that if no immediate action is taken, the number of girls being defiled could even double by next year.

James Mudede, the LC III Chairperson of Bwijanga sub-county says most communities in the area perceive girls to be ready for marriage when they become adolescents. He also blames the parents for not playing their role well saying if they were providing for their children, the district would not have registered such cases.

Peter Mukasa, the Community Liaison Officer-CLO at Masindi Central Police Station says that although some of the defilement cases are reported at police, others go without being reported since parents want to negotiate defilement cases with the suspects. He adds that they are investigating police officers who are accused of extorting money from parents of defilement victims saying such an act is the frustrating efforts of fighting the vice in the district.

The entire Bunyoro sub-region is battling with both defilement and teen pregnancy cases. In September, Authorities in Kibaale district reported that they had registered a surge in teen pregnancies with more than 6,000 cases reported between July 2020 and August 2021.