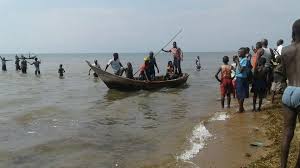 Two fishermen have died in the Lake Albert waters in Hoima district after their boat capsized.

The deceased have been identified as Godfrey Kandole and one Richard, residents of Kibiro landing site in Hoima district.

Godfrey Abigaba Bitagase, the chairperson Kibiro LCI, says that the two fishermen met their death when their boat was reportedly hit by strong winds that forced it to capsize. Two of their colleagues survived the accident.